Not on My Watch: The Smoking Gun?

SPOILER ALERT:  I am starting Chapter 7 in Not on My Watch by JC Bodden.

Things are heating up.  And I don't mean between Dev and Ellie.  Although not for lack of trying, on her part.  Lorddddddddd that woman is a maneater!  I could have used some lessons from her when I was young and single.  She's quite sure of herself, no?  Dang.

So they just found out the bullet from the gun that was used to kill Bobby Earl Davenport (three names; never good) came from a police revolver - and they think it was Devlin's.  And my gut tells me they're going to find out it was Devlin's.  The guy (the real guy, not Bobby Earl, duh) has been in and out of his house...it's not odd that he'd have been able to steal his gun and replace it.

And how about sassy-ass Jennie!  Damn, girl!  I know you're upset about your kidnapped son and all...but show some manners, lass.  I know the maneater is standing there in her Oscar gown and making you feel enormously inferior in the hottie department...but Devlin didn't raise you to be a little snotty pants!  So pipe down.

And Joe...lordddddddd Joe.  Did you not feel terrible for him when they were listening in on the kidnapper phonecall and he had no idea what was being said...about his own son!  Horrible!  I still love Joe the most out of all the characters.  Hopefully JC will write us a book that begins with the night Jennie and Joe got home from her kidnapping...and ends with the birth of the twins.  I'm sure something criminal happened during those years...you know, so she can throw in a little bit of drama.  I always enjoy a little mystery with my romance. 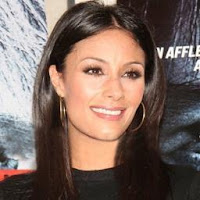 PS - I can't help but see Elliot as Liz Cho.  Looking forward to hearing JC's opinion.  I can almost hear the laughing all the way from my house in NJ.  ;)

And how did you like the rest of the book? I thought it was fantastic!

I enjoyed it and will post my thoughts on the second half soon! :)