Oh. My. God. Where are all the Outlander, Bronze Horseman and Seyit and Sura fans?? You need to see this. Subtitles and all. (Lord help me, please don't watch it dubbed.)
Obviously you can't compare it to the above stories as they're historical fiction, and this is modern day (actually there are a ton of flashbacks)...but you CAN compare the feel of it and the fact that it doesn't fit into any one category.
If you're a fan of Romance, Science fiction, Mystery, Adventure, and Comedy, this one is definitely for you! ❤️
Posted by Purgatory Carol at 10:45 AM No comments:

This is literally the cutest series I've ever seen. And that is a ridiculous description because it's fast-paced and thriller-esque in spots, all while being a lovely romance that reminds me of the 80s. Loved every second and can't wait for Season 2. What I wouldn't do to have my very own Holo! 😍Although I fear I'd be taking him to the casinos, a la Rain Man. LOL

Posted by Purgatory Carol at 10:24 AM No comments:

FALLEN (asleep while watching this film)

The next time I start to watch a dark romantic film...please stop me. I bet this book was really good. But this film was so...not. Visually, it was beautiful. And most of the acting was pretty decent. But the holes. Lordddddddd the holes. So many unanswered questions; things that don't make sense even ten minutes after you've finished watching. What the actual hell? It's such a shame when a film isn't done well and could have been absolutely spectac.

PS - the similarities to the Crave series are comical. (Why do you think I picked it on Netflix? Duh!) I'm guessing Tracy Wolff read/watched this too. Just a hunch. LOL

Posted by Purgatory Carol at 5:47 AM No comments:

Welcome to my new obsession. This is what's getting me through Crave withdrawal. 🖤
Posted by Purgatory Carol at 7:51 AM No comments:

I Finished Covet. And I need a drink.

I have finished Covet. Lord help me. There is one more book in the series, "Court", coming out in September...but as they say in Blackjack, I think I'm going to "stand."
I'll probably wait for the film/show because I just don't think I have another read in me, no matter how much I enjoyed the first three books (and wanted to throw them across the room at times.)
The Crave series has the potential to be amazing on screen, if they hire the right actors and spend an exorbitant about of money on cinematography and CGI. However, please stick a fork in me. Between the intense situations, various holes, and repetitive nature of YA romance (which, admittedly, I read by choice)...these books are exhausting. I feel like I need a vacation.
Not to mention there is just such a stark contrast between Book 1; Crave...and the rest of the series. I've never been able to get past it.
I've already beaten the dead "why create an amazing character and then sideline him" horse. But bottom line, I am - and will always be - a Jaxon Vega girl. Just like Grace stands up for what she believes in; so do I. Which means I won't apologize for it. Hudson is an intelligent guy with a lot of snark and sass...but Jaxon's a vampire. End of story. 🖤
Posted by Purgatory Carol at 11:27 AM No comments:

Covet: Has Anyone Seen My Book Series?

MAJOR COVET SPOILERS AHEAD!!! Read at your own risk!!!
WTF am I reading? Tracy Wolff, why have you forsaken me?? One minute I'm happily plugging along on Crave, a good, solid YA vampire novel, being wowed every other minute and worshiping at the alter of Jaxon Vega. And the next, I'm wading through a barrage of immature Hudson Vega quips and wondering where the strong and sassy Grace went. Because she she started disappearing in Crush and I can't find her at ALL in Covet. If the intention is to throw so much sickeningly sweet Hudson and Grace flirting at us that we have to stop in the middle of the chapter we JUST STARTED to get online and bitch about this book because we literally CAN'T STAND READING IT, then hear hear to a job well done. (Almost as good as my run-on sentence skills.)
Normally I would never, ever yell at an author in a blog post. But yeah, I'm talking to you, Tracy-without-an-e. Because I'm mad. I'm so mad I could spit nails. First series in a LONG ASSED TIME that I was SMITTEN over and had me reading under the covers at 3 am. I told so many people to read this series because Crave was a good, solid paranormal novel with interesting characters whose lives you wanted to dig into...and a plot that made you sit up and pay attention to what was going to happen next. I could not WAIT to get my hands on Crush and Covet once I read Crave. And when I did, I could not believe you could take this PERFECT VAMPIRE who YOU CREATED...and turn him into chopped liver before our eyes. And why? WHY???? (I wonder if Nancy Kerrigan has read this?) You gave him to us and then ripped him away before we knew what was happening! Why would you do that? You tainted your own series!! It's like when Kurt Sutter canceled The Bastard Executioner after one season!!
Let me back up a little here. I like Tracy Wolff's writing. I RESPECT her and her years of hard work and dedication. She obviously has tremendous literary abilities. I recently listened to an interview she gave on a podcast and have been looking forward to reading another of her book series, as soon as I'm finished Covet.
But Tracy, all of that doesn't change the fact that you have left countless people - from teens to grandparents - HEARTBROKEN, with your confusing neglect of Jaxon Vega, a guy who wanted to protect Grace because SHE WAS A HUMAN WHEN THEY MET.
And it is crystal clear that the goal of this series - only made evident AFTER we all fell in love with Crave - is to prove a feminist point that women are strong and don't need to a man to solve their problems; they can do it on their own. Only one problem. Hudson "steps in front of Grace" TIME AND TIME AGAIN in Covet, to protect her. How is that any different from Jaxon??? I'll tell you how; Jaxon would have listened to Grace when she told him something bothered her, and he would've felt really bad from the word go. Not Hudson though. He's constantly making rude little comments and fighting with Grace when she dares to call him out...because he thinks he's so much better than not only her, but everyone else, too. Yeah, yeah, he's "insecure" deep down. Not buyin' it. Sorry not sorry.
The BICKERING is insufferable (when they're not gazing into each others' eyes.) And when he REALLY hurts Grace's feelings, what does he do? He sulks...and then apologizes. Time and time again. Hurt...sulk...apologize. Hurt...sulk...apologize. Tell me THAT isn't a slippery slope and a pattern we've all heard before. What kind of lesson is that teaching young people about a healthy relationship?
Lastly, Grace's treatment of Jaxon is absolutely unforgivable. This girl started the series commanding such high regard of the characters and the readers. Now, she's become selfish as hell and only cares about herself. HER mating bond. HER feelings. HER needs. HER power. Jaxon took her to see the Northern Lights, and took her to make a snowman, and found her tacos and was THERE FOR HER when she needed - YES, NEEDED - his help. And she's made excuse after excuse. He's not perfect, but my god, woman...you cut his heart right out of his chest and ate it for lunch! You wanna talk power? Just stand up, SAY HOW YOU FEEL, and be with Hudson since that's what you've wanted since Crush started (or you wouldn't have left Jaxon alone so many times.)  Don't sit around being passive aggressive and telling yourself Jaxon's done something wrong. Because he hasn't. YOU have.
I'm getting tired and starting to not make sense...so I'm going to leave this right here until mañana...and probably laugh when I come back to it tomorrow and delete the whole damn thing. We'll see. LOL
Posted by Purgatory Carol at 10:58 AM No comments:

Ain't it the Truth! 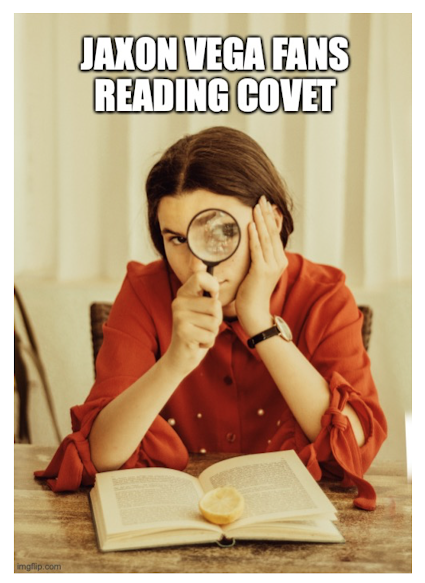 Posted by Purgatory Carol at 10:55 AM No comments:

I COVET My Own Sanity!

Covet - the third book in the Crave series by Tracy Wolf - came out yesterday...and I don’t even know what I’m doing.

Be prepared for SPOILERS forthwith.

I’m reading this thing, I’m freaking out, I’m laughing a little, and I’m getting really really annoyed with Grace. “Self-centered“ doesn’t even begin to describe how she’s coming off. Everything is about her. How SHE feels about Hudson and how SHE feels about Jaxon (say it soft and it’s almost like praying.🖤)

Right now we’re in Jackson’s tower and she’s seeing all his workout equipment for the first time and SHE doesn’t like it. It doesn’t make HER feel good. You know what? How about taking two seconds and realizing other people exist besides you, and they have feelings too? We haven’t even seen him in the scene yet and I already know he’s doing all this working out because he’s beating himself up over the fact that he was helpless while she was in the ring. And I’m thinking about how horrific this whole thing has been for him and how this must be killing him. But not her, Grace is just thinking about the fact that all of the things SHE loved about this room are gone. POOR YOU! (said like Tony Soprano‘s mother)

If I am to get through this book, Flint better get busy cracking more jokes in the middle of class, to take my mind off of Grace’s selfishness about all of her many suitors. Sorry, not sorry.

Posted by Purgatory Carol at 9:52 AM No comments:

A Discovery of It's About Time!

Enjoying the heck out of Season 2 of A Discovery of Witches...and am happy to report Diana and Matthew are keeping the bickering to a minimum in the show. The book was...a different story.
OH and PS - Hi Tom Hughes, aka Albert from Victoria on Masterpiece. How are you? 😍
Posted by Purgatory Carol at 5:10 PM No comments: 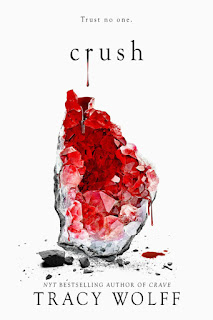 So I flew through CRAVE...and could barely keep my wits about me. Jaxon Vega is the hottest conflicted soul to come down the pike since that guy who lamented about everything and nothing in Midnight Sun.

Which is why I am now losing my ever-loving mind while reading CRUSH.

I am 50% in and am losing it and have no one to talk to about the massively sharp turn Tracy Wolff seems to be taking. And I'm reading and reading and it's getting sharper and sharper and I'm terrified to keep going. Because I could leave this thing right the hell here...and all would be well. But instead, I keep reading and freaking out and going further down the rabbit hole.

Posted by Purgatory Carol at 8:38 AM No comments: