My Purgatory is giving away a signed copy of Stephanie Evanovich's "Big Girl Panties" to one lucky winner over on Facebook!

Get over to the My Purgatory page and enter!!!

Netflix's House of Cards: An "Oooh Snap!" Kind of Show

SPOILER ALERT:  I have watched Season 1, episode 1 of House of Cards. 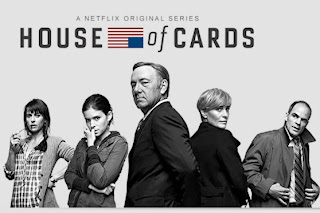 We turned on House of Cards tonight after seeing an interesting New York Times blog post about Ugh...a political show about Washington?  Meh."
its Emmy-worthiness.  My first thought upon the first scene?  "

My second thought about 10 minutes later?

"Ooooh SNAP!  I think I can get into this show."

Kate Mara is OUTSTANDING.  Absolutely delicious.  That woman seems like she'll do anything for a role.  And I love her for it.

Kevin Spacey is...classic Kevin Spacey.  Fantastic slow, southern drawl...calm, cool exterior...and a hurricane of vengeance going on behind his eyes.  WHAT a fun character.  And when he talks to the camera, OMG it's absolute genius!  Like Malcolm in the Middle...for grownups!

Robin Wright Penn - I have loved this woman since she played Kelly on Santa Barbara.  She plays a very structured, calculated bitch (I mean that as a HUGE compliment) and I can't wait to see what kind of "take that" she cooks up this season.

LOVE the backstabbing that is already taking place.  Stealing half-shredded documents from a dumpster in the middle of the night?  OutSTANDing!!!

True Blood: Does Anybody Remember Laughter?

SPOILER ALERT:  I am caught up on True Blood as of July 14th. 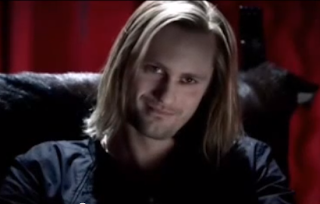 How Stephen Moyer hasn't told them to eff off by now is beyond me.  Then again, he's got much more (stupid) storyline than he did in the books at this point...so I guess he's happy.  And he gets to remain on set with Anna Paquin and watch her make out with pretty much everyone on set.  (Haven't seen that yet this season?  Just wait.  It'll happen.  Clothing optional.)

OK so why do I continue to watch?  Because some of the things I *have* seen are just SO MUCH LIKE THE BOOKS and I can't help but love it.

I LOVE all the zooming around the vamps do.  It's perfect.  Here one minute - gone the next.  And
Eric flies.  That, alone, is worth all the huffing and puffing about boring Sam Merlot's storyline all night.

I am also digging the Pam/Eric storyline right now.  She's all "eff you - I hate you" but we all know she lives for him.  It's kindof like highschool boyfriends.  Tara's talents are completely wasted - up to this point.  What happened to the hilarity that girl used to bring to every show??  I am kindof liking her in the vamp camp though...and I like that went voluntarily with Eric.  Eric and Tara?  Together?  Helping each other out?  Now THAT is interesting. 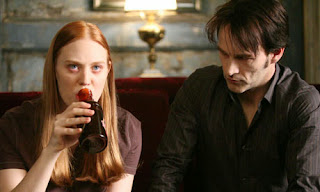 Jessica is starting to scare me, too.  Lordddddddddd the whining.  She is whining about killing those fairies almost as much as Khaleesi whined about her dragons last season on Game of Thrones.  Shut the eff UP already!  And Bill is not your dad.  I was in SHOCK when he turned her away.  HE is a vampire, too!  You'd think boyfriend would realize it's OK to get it on with your progeny.  Hello?? Eric and Pam, much???

I don't know how to feel about the sortof hot/sortof not vamp, Warlow who killed Sookie's parents.  One minute I'm like "Does anyone now how this guy got this role?"  and the next I'm like "Oh.  THAT'S how he got this role.  Yum."

Let's tally, shall we?

Jury's still out:
Tara
Sookie
Jessica
Lafayette (it PAINS ME OT SAY THAT.  GIVE the man a STORYLINE!)

The reason I watch:
Eric 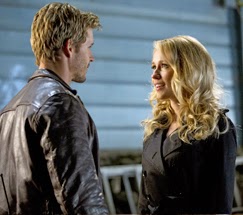 I will continue to watch, just for scenes like Eric turning the governor's daughter.  That was somewhat new territory for True Blood.  Very sensual...yet sweet...with shades of Bill and Sookie's first encounter.

But I am hangin' by a thread.  Here's hoping SOMEONE on that production crew has read the books.