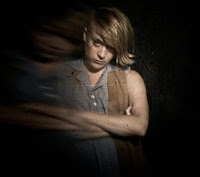 OMG did you see American Horror Story last night?!  Um, I'm sorry...but WHAT happened to Chloe Sevigny after that kid found her on the stairs and started screaming?!  I kept waiting all through the episode for the police to show up at the House of Horrors and arrest Dr. Mengele.  WTF?!  They better pick that storyline back up again at some point.

Random question out of left field:  Is that Evan Peters' eye in the "starting" of the show that has blood coming out of it?  I keep forgetting to find out.

OK back to last night's creepfest:  OMG that poor reporter (does ANYONE know her name?  I'm too lazy to go look it up) is TOAST.  And friggin Zachary Quinto, man.  WHAT have they done to him?  He went from Jekyll to Hide in about 2 seconds.  I don't like that.  His character in Season 1 was SO endearing because he was all bitchy and always feeling betrayed by his partner...and now he's just...I dunno...the exact same douchy character he played on Heroes.  Although I am digging the "SAW" aspect of that storyline.  (It's too bad they can't hitch the always tasty Cary Elwes up to this wagon.)  And that poor girl on the floor.  OMG is she dead? WTF?!?

And I am starting to feel sorry for Sister Jude - aka Jessica Lang.  She started out as the villain but we're now finding out she's the only one there with a conscience.  And you KNOW The Nazi Hunter is going to find a shitload of dirt on Mengele and show up with it one of these days.  I'm thinking that'll be the day the police show up with a) an arrest warrant for the nasty Mengele Mangle of Chloe Sevigny....OR...b) WITH Chloe Sevigny!  Wouldn't THAT be a hoot?!?

LASTLY - I liked Devil Nun before she was Devil Nun.  Is it me?  She was just so sweet and such a neat off balance to the show.  (Has anyone ever used "off balance" as a noun?  Cuz I think I just did.)  Now she's evil - like everyone else.  Yawn.  Done to death.  Meh.
Posted by Purgatory Carol at 6:39 AM