SPOILER ALERT:  I have one True Blood left this season.

WTF.  No seriously.  W. T. F?!  Have I been watching True Blood?  Because it feels more like Bonanza with a little vampire fun thrown in. 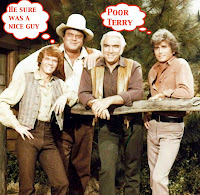 Let's start with Terry Bellefleur's ONE HOUR FUNERAL last night.  Seriously?!  Don't get me wrong, I really liked Terry B.  I liked him in the books...I liked him on the show.  But the man was a secondary, no, TERTIARY character.  Why center an episode around his death?  Effing flashbacks and stories.  It made no sense!  I said to my husband "Why are they trying to get us to like Terry so much now that he's dead?!"  I'm already annoyed that they killed him off.  Why rub it in?!

Dear Alcide, France called, they want that women's hairstyle back.  For the love of all that is holy.  They can't put that mop in a ponytail or some sort of man bun for the funeral where he's supposedly "all dressed up" (in his checkered shirt and jacket...LOL).  WHY is this person still on the show?  He has no place.  He HAD a place in the book series...but now, he's just eye candy...and I can watch Magic Mike for that.

Dear True Blood Producers, you have taken Charlaine Harris' very unassumingly charming character named Sam Merlotte and made him into the most boring character that has ever NOT graced HBO's presence.  Please kill him and put us - and Sam Trammell - out of our misery.  Either that, or let him get into trouble with Andy and banter with Sookie at Merlotte's...LIKE HE'S SUPPOSED TO.

Can someone please explain to me why all the vampires have to remain in captivity, two seasons in a row?  It's getting horrifically old.  One or two eps - fine.  But the whole season of them in god-awfully unflattering jumpsuits, sitting around playing Go Fish all day?  NOT interesting.  In the least.  Although - I will say this:  You killed Eric's annoying sister, and for that I am eternally grateful.

- Blondie in the white suit.  Not only did I know Jason Stackhouse doesn't have it in him to kill someone in cold blood, but she is way too juicy a character to kill.  Can't wait to see what she cooks up next.

- Sookie's new romance.  I find it intriguing.  Although I can't decide if I find Warlowe meh - or hot.  He seriously changes from minute to minute on that show.  He's like that girl on Seinfeld who looked good - or bad - depending on what lighting she was in.  His accent helps though.  That, I will give him.

- Bill Compton in a white henley.  My lord that man certainly does rock the henley.  Espesh when it's ripped up and covered in blood.

- Eric...doing anything, anyone, anyhow.  (Except killing Steve Newlin - I'm bummed about that.  He was a great character.)  I love when he flies.  I knew he was going before Pam even told him not to.

- Lafayette.  Lordddddd thank you for Lafayette.  Although - is it me - or are they girling him up a bit too much lately?  I always felt like the best thing about Lafayette was his perfect mix of femininity and masculinity.  Now he's all done up with his doo-rag...AND hoop earring...AND false eyelashes...AND sequins...  I'm not sure if there's still a mans anywhere in there.  (Said like Lafayette!)

- Jason Stackhouse.  OMG I love this man.  I hope they're paying him well, because he, Nelsan Ellis and Alexander Skarsgard are they only things keeping this show afloat.

Long story short - ONLY thanks to the vampires - and Jason Stackhouse - was last night's episode a ton of fun.  It reminded me a lot of the Book 4? ballroom scene at the Queen's house we were totally robbed of now that they've all but forgotten Charlaine harris...with all the carnage and Eric being on a mission...

...now if only he would've rolled a head and excitedly exclaimed "Bowling for vampires!"


Posted by Purgatory Carol at 8:42 AM

bonanza! i can just hear the thundering hoofbeats with bill and eric to the rescue! and when bill yelled, "northman," you know he was really muttering, "newman!"

and you had me rolling in the aisle with your alcide comments! so true, that hair ("mmmmm, smells like a man!"); that outfit (dressed up?). and good old boy hoyt's mom made an appearance--where has she been? seems like i remember her being deceased.

the whole episode was very disjointed and strange, although maybe it was a good angel vs bad angel scenario? or good writing vs bad writing?

post it note to lafayette: one does not wear false eyelashes to a funeral! thank you, grandma bellefleur for the hilarious asides.

and thank you, jason stackhouse, for remaining the same character for so many seasons. you are one of the few constants in the show--and you have great muscles.

warlow--meh or hot, loved the seinfeld reference! jury is still out on this one, although anyone who shows up in a fog in the bathroom cannot be a good egg--i smell sulfur.

the funeral--good grief, why? besides the chance for the entire non-vampire cast to come together and for the menopausal twins to eyeball alcide, what's the point?

and RIP to ex-Rev. Steve, we will miss you. ...julie in jersey

OMG GRandma Bellefleur was hysterical!!! I forgot all about her!!! And Maxine Fortenberry ("you put down that pie!" was tremendous...and always is.

PS - Thank you! They have taken Lafayette wayyyy over the top.