OH shiz - Catherine knows a TON of shit if she's the one sending everyone in to visit Bash at Privy Counsel. First the pregnant girl..and then the woman who tried to kill him.  Queen K is not to be messed with.

Here's what's bothering me already in this episode:

"Isabel's father was my mother's half brother".  Wait, what?  Shit.  I have to think about that.  OK so you're sortof first cousins.  Nice.  You people could rival the Dukes of Hazard crew...

OK and now Bash is sending the pregnant girl to his "other cousin's".  He sure does have a lot of family for being a bastard.

Taking the pregnant girl out the back way...dressing her up to look like a blueberry...

OK so now we know Catherine is definitely behind the poison.  (Um, duh.  No big stretch.)  Can you blame her?  Survey says...NO WAY!  I mean, seriously.  With Bash dead, her son would be the future king.  Of course, she'd have to kill Mary at some point...but...whatevs.  I'm a little disillusioned with her at this moment in time anyway.

I'm in hysterics at the fact that Catherine is redoing the dungeons in a lovely shade of Versace...

Bash's mother's father had a bastard son, too.  "Jonathan Durant"  That's the pregnant girl's father.
GEEZ!  Very progressive for the 16th century, no?

"I marvel to think how grating and tedious you must also be...to achieve such a thing..."  ROFLMAO.  The best part about that statement is that I can't even remember who said it!  Catherine?  Mary?  Either way, it's positively scrumptious.

"Do you think I care what the kings former bed thing chooses to gossip?"  ROFLMAO  "former bed thing".  Now THAT is funny.  Does anyone truly like Kenna?  I know I don't.

Mary!  Don't be a ho!  Looking all cutesy-eyed at Bash.  Did you not just wake up with Francis YESTERDAY morning????  Which reminds me... 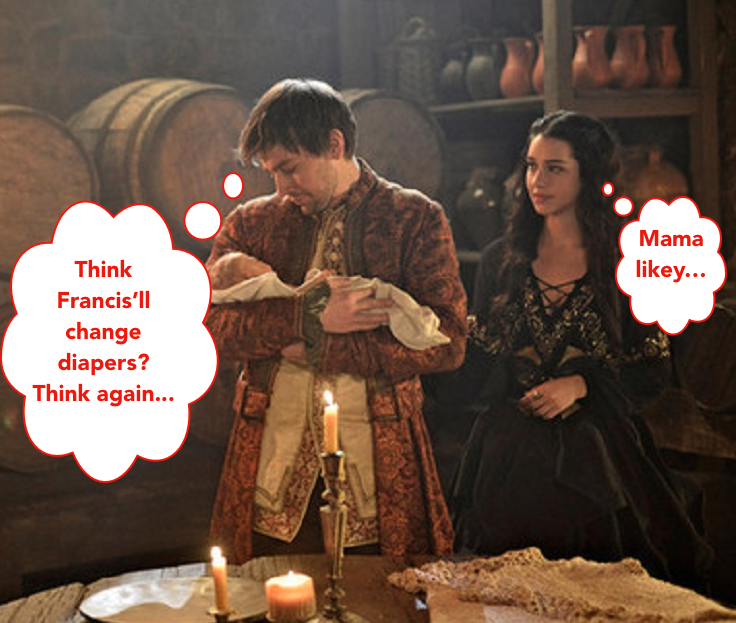 OMG now the baby's mother is dead??  Oh shiz.  WHO is going to raise that baby?  Watch Henry be
all cute with her or something.  That'll make me vom as he pretty much hates anyone without a pair of tatas pointed squarely in his direction.

Awww isn't that cute.  Bash and Mary cut their hands and dripped blood onto the grave.  Right before they MADE OUT.

Oh yeah and I just saw the scenes for next week.  Ummm...did anyone ask themselves...

Postscript:  I find it absolutely delicious that this is the first week my hubby didn't fall asleep whilst during the show.  Why?  Because he doesn't like Francis!!!

HERE are the scenes for next week's episode, "Inquisition".  I'l tell you what...if Francis' hot, boney ass doesn't show up by the end of this episode, I'm someone's going to need a sedative.