Spoiler Alert - I have watched up through episode 8, "Fated".  Lorddd have I watched. 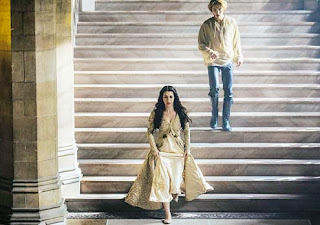 HOLY SHIT!!!  Was that the most angst-filled episode you've ever seen??  OMG here's Mary, riding off on a horse with BASH of all people...and Francis is falling to his knees in despair!  Oh my lord...you just cannot MAKE this stuff up!!!  It was gut-wrenching!

And WHY do I LOVE Queen Catherine???  HOW can I?  She's delicious!  Why?  Because she's smart as hell.  She makes some tough choices and backs herself up at every turn.  I can't help but agree with a lot of her choices, even though they seem vicious.   (OK - maybe not her ability to have people killed; that's a little over the top.)

And I LOVE the whole frenemy sitch with Catherine and Diane.  Catherine could've killed Diane long ago...but she sees her as nothing more than a fly on the beach to be swatted away.


OH my god...I just can't get OVER it...is Mary the biggest dumbass on the planet??  Just TELL Francis what's going on!  LET his skinny, white ass talk you out of leaving!  He's not exactly Chris Hemsworth, this is true...but boyfriend's HOT and he's got CASTLES and shit.  And you kindof sortof really truly LOVE him!!  Ride that wave as long as you possibly can!  Just tell Nostradamus to f%$# off and go figure out a constellation or something.  Geez.

And is it mean if I was sad that it wasn't Kenna lying on the floor in a pool of blood?  I just think the King's Official Annoying Mistress has no place on the show.  The king doesn't want her.  Mary wouldn't miss her.  Catherine is disgusted by her and Diane probably hates her.  BUH bye, Kenna.  Don't let the heavy, wooden, iron-hinged door hit you in your scrawny ass on the way out!

Did I just see Mary's stupid rear end kissing Bash in the scenes for the next new ep on January 23rd??  WHY??? (screamed like Nancy Kerrigan)  For the love of god, why?  Don't get me wrong...the bastard brother is seriously minty.  There's no debating that.  But he's not the one you love and you KNOW it, ya moron!  Every time you kiss Bash, you eff things up with Frahhhhncis even more.  Do NOT do that.  If for no other reason than the fact that Francis has much better hair.

AND Francis finds out in the scenes, too.  THANK GOD.  He better talk some sense into Mary's dumb ass.  Crap - I really have to google.  All this time I've been obsessing over the Tudor wives and Elizabeth I; I should've been studying Mary, Queen of Scots!  Who knew?!  NOT that I think most of this is even remotely factual.  But who needs facts when we've got the sickest guy-girl angst on the planet??  I'm fine with suspending disbelief if it leaves me wanting more at the end of every ep!  January 23rd?  BRING IT ON!!!
Posted by Purgatory Carol
Email ThisBlogThis!Share to TwitterShare to FacebookShare to Pinterest