Reign: This One's a Keeper!

If you are watching Reign to get your fill of historical accuracy, do not even bother.  ("Bash" is a completely made-up "character" and did not even exist in "real life".)   But if you want total soap-opera awesomeness, complete with beautiful royalty and a boatload of angst, get your ass to the CW on Thursday nights. (I just read the Halloween night ratings weren't nearly as low as they'd expected for a fledgling show.  Right on!) 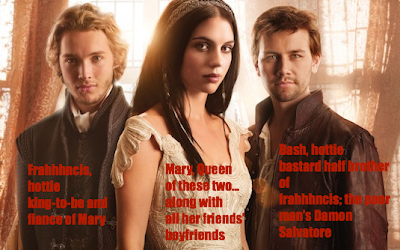 So...what's this show all about?  Well - first you've got Mary, Queen of Scots (we all know I find the word "Scot" delish in any context) who is trying desperately to hitch her cart to any royal wagon she can find so she doesn't find herself toe up with Scotland being run by the English.

Then there is Prince Francis (pronounced Frahhhn-sess), her fiance since the age of 6, who is avoiding marrying her...yet undeniably attracted to her at the same time.  Francis is a pretty decent dude who is just trying to learn from - and impress - his father, the slutty king who has a wife AND a public mistress.  And a son from each bed partner; Francis from his wife, the ever-bitchy Queen Catherine (who counts on Nostradamus for all her fortune-telling needs)...and Bash from his mistress, what's her name.  Bash is hot in a Damon Salvatore way...and seems to also be a pretty decent dude and is tight with Francis (which is usually unheard of when it comes to fictitious half-brothers from your king-daddy's other main squeeze.)

If you dig somewhat accurate period pieces and lots of drama...you MUST watch Reign on the CW on Thursday nights.  (You can watch all three episodes online at the CW!)  This new, little show needs all the help it can get to "reign supreme" on today's impressive TV lineup.  (Pun intended!)
Posted by Purgatory Carol
Email ThisBlogThis!Share to TwitterShare to FacebookShare to Pinterest