Spoiler Alert:  I am caught up with HBO on Game of Thrones.

OMG it's getting HAIRY.  My friend Shannon called this AM and said "Did you see Game of Thrones?  I'm confused!"  and I said "Helllll yeah; I am, too!"  LOL

Seriously - the secondary characters and storylines are getting a little hard to follow without pie charts, bar graphs and the ever-famous Game of Thrones Character Wiki.  But that's OK because it's so good, I cannot contain myself!

If you think for one minute that Khaleesi is giving away that dragon, I've got a bridge to sell you in Siberia.  (That is soooo not the way it goes, but work with me here.)  Shannon thinks that dragon is going to fly back to her...and I tend to agree.  Or she's got something else up her sleeve.  But what crazy-assed, Dothraki-speaking, unnaturally blonde bitch runs around waxing on about her dragons for an entire season...and then SELLS one?  Aint-go'-happen, y'all.  She's plotting...and I'm giggling. 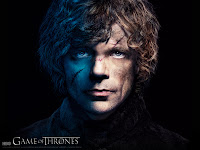 Onward.  Tyrion, my love, what have they done to you??  Your poor face.  It makes me cry.  And your self-confidence seems to be wavering in the shadow of your ASSHOLE, possibly non-paternal father.  But you did well with pulling the chair to the head of the table (always one step ahead of Cersei).  Now we've just got to get you back with that sweet, little hooka you shack up with and send you on your way...AWAY from these horrible people who keep you DOWN in life.  And to the ever awesome Peter Dinklage, I say  "WHAT'S UP JERSEY BOY???"  (Always have to remind everyone he's "from Jersey" and not some town in England with a "shire" on the end.) 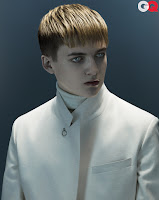 And that sweet little hooka is protecting Sansa, thank GOD.  That poor girl.  I've wanted her out of that craphole kingdom ever since SATAN showed her her father's head on a stick.  And might I ask...has anyone ever noticed how incredibly odd-looking striking Joffrey is??  He's played by a 21 year old named Jack Gleeson.  How'd you like the be the guy who was purposely hired because you look off-putting striking in order to look realistic whilst playing the son of a brother/sister team??  And if you google him, you'll find the photographers/make-up artists/designers/etc play up his strange features strikingness wonderfully.  Just look at that GQ creep show!!!

Last but not least (for today; I could go on all night about this show) OMG JAIME LANNISTER'S HAND!  WTF??? That was SICK!!!!  And I am so afraid of what is going to happen to Sasquatch.  They clearly have zero respect for human life OR dignity.  They might be even worse to her now that Jaime mouthed off.  And now Cersei isn't going to want him anymore, now that he can't fight big, bad...uhhh...bad guys with his sword.  Maybe Arya Stark will teach him to fight left handed.

Wow Carol you did really well remembering all the names, I usually just say 'the dragon lady' etc for people. Isn't this a fantastic show? I don't want to say much b/c I am one episode ahead of this post but I totally agree with everything you have said. I couldn't believe his HAND! Can you imagine, it is there and then there but not attached, just one swipe of the sword and GONE?! I am so glad I am not living in thrones times, I don't think it was fun for anyone.

and has NO ONE caught onto the whole Joffery is an evil brother/sister team kid? I mean come on with all the little 'birdies' flying around for everyone how can they NOT know.