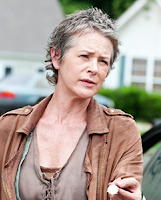 SPOILER ALERT:  I have now finished Season 3 of The Walking Dead.

Um, could someone tell me WTF I just watched?  They ENDED the season with joyful music and a close-up of a cross?  (Whose was that, by the way?)

Where's the big cliff hanger?  Where's the angst?!  They finished EVERYTHING and tied it all up in a pretty pink bow!  WTF is up with that?!  They should've dragged out the Andrea scene into next season.  (Totally bummed that she's dead, by the way.  I loved her.  Although she didn't have much of a place in either camp this season; I should've expected it.)

OK so let's talk Carl.  Lordddddddddddd the ever-annoying Carl.  I can't STAND when kids think uncle" and throws that stupid cowboy hat across the walker-laden fields like an extreme frisbee.  HOW funny was it when he saw all those people get off the makeshift school bus (it was like the anti-Partridge bus from hell) and was obviously soooo mad?!  I cheered!  Rick was all "you killed one kid and I saved like 20, dumbass" with his eyes.  It ruled.  As much as I love Rick, that's how much I can't stand Carl.  Lori's kid, through and through.
they're adults.  That kid annoys me so much, I want to grab his cute little nose and twist it until he yells "

Not enough Daryl tonight.  LOVED when Carol got all badass and killed that walker when Glenn and Maggie were closing the gate.  It was like "Whoa - where's Carol's mojo been all this time?!"

OMG Michonne.  Michonne, Michonne, Michonne.  I love her character so much.  She's SO stylish (I am the queen of wraps, so I dug tonight's ensem), she's so pretty and she's SUCH A FRIGGIN BADASS...I just want to hug her.  She doesn't even FLINCH when she kills those walkers.  And how about her reunion with Andrea?  OMG I was so sad.  And she refused to leave her.  Did you catch the irony in that?  Andrea left Michonne.  I just LOVE THIS SHOW.

So sad we have another 6 months until it's back.  What will I do until then?  I woke up dreaming about walkers this AM and I hadn't even seen the show in two weeks!  I am already in withdrawal!  I'm running out of shows!  Somebody better bring Walter White or Jax Teller back soon or I'm going to lose my shizzle!!!
Posted by Purgatory Carol No comments:
Email ThisBlogThis!Share to TwitterShare to FacebookShare to Pinterest
Labels: andrea, badass, carl, finale, michonne, mojo, season 3, wrap
Older Posts Home
Subscribe to: Posts (Atom)