Vampire Diaries: Goodbye to You

SPOILER ALERT:  The following are my thoughts whilst watching episode 11, "500 Years of Solitude."

"In a shocking twist, Katherine's daughter's a psychopath."  ROFLMAO!  Damon is so friggin' funny, I don't know what to do with myself.  I'd like a book of nothing but Damon's one-liners.  Think someone can make that happen over at the CW?  Let me know.  Thanks.

WOW Klaus and Caroline getting BUSY in the woods!  This is outSTANDing!!!  I've wanted these two together since his hot, douchey ass first told her he dug her.  I love the angst, too.  "Ummm...OK so I'm going to give you the bestest, hottest, up-against-a-tree sex that you've ever had....and then you're never going to see me again, mmmkayyyy?  Great."

"Get out, Elena."  I just said that.  *I* did.  Me.  On my couch.  That just popped right the hell out m'mouth.  OUT LOUD.  Just take your skinny, immature ass right back out the door and let Katherine die with a shred of dignity, please.  We all know you're perfect and she's the devil.  Got it.  Now go.
Ummm...OK so when did Elena become a phlebotomist?  Oh right...it was only a shot.  She's just so good at so many things...it's hard to keep track!  What's next?  Astro-Physicist?

Oh SNAP...Katherine's Elena!!  NICE!!  Didn't see THAT one coming, either! (Seems to be the phrase of the night!)  OK so it looks like SOMEbody's been watching Once Upon a Time and wanted to try out the old person-switcheroo.  THIS is tasty as hell as storylines go.  Think about it.  Elena's going to come close to being buried...and Katherine's going to go schtup the shit out of Damon.  I think I LOVE this!!  Wait - maybe she'll dump Damon and hook up with Stefan again (because we all know he'd be slightly more AWESOME in bed than Damon.)  ;)

And lastly...Stefan.  I'm sorry...but I can't stand watching him be all nice to Damon about Elena.  Um, EW!  He totally got the short end of that relationship stick.  Or did he?  Actually - he made out pretty well as he's NOT HAVING TO PUT UP WITH ELENA'S WHINING ANYMORE!!! 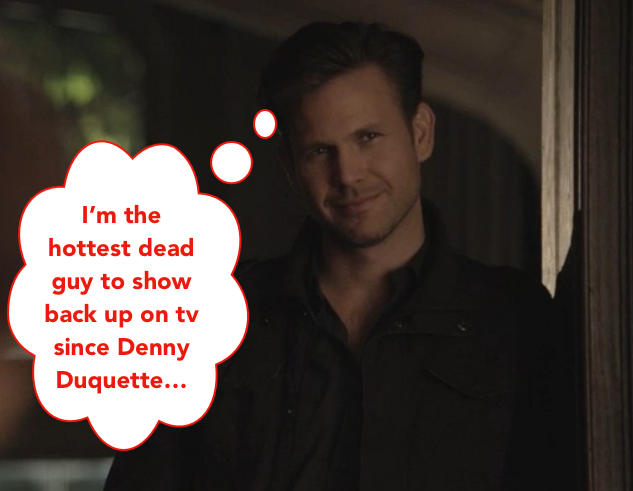 OMG and how about all the dead people showing up in this episode???  ALARIC!!!

Be still my heart!!!  It was like being blinded by a thousand rising suns.  (Yes.  I do love Alaric and my life would be more COMPLETE if the CW didn't feel the need to OFF HIM.)  ;)
Posted by Purgatory Carol at 2:28 PM No comments:

Reign: I Can't HANDLE the Truth!

SPOILER ALERT:  I wrote this while watching episode 9,  "For King and Country".

"I grew tired of you a decade ago."...ROFLMAO!  The king gets on my last nerve...but that shit was funny.  And Catherine deserves it, too.  She causes such destruction and then sits back and acts like she knows nothing about it.  Bitch needs to "get hers".  Nomesane?  (That's "do you know what I'm sayin'?" for anyone who didn't get my sad attempt at humor.)

FRIG - I feel so guilty.  I love Francis.  I adore Francis.  Yet Mary's not away from Francis 10 minutes and I'm already salivating over Bash.  SHIT.  This never happened to me with Vampire Diaries.

OMGOMGOMGOMGOMG WHAT???  Mary MARRY BASH?!?!?!  If that happens, I don't know what I'm going to do with myself.  The second she and Bash were back from her adventure in the woods, Frahhhhncis was all KINDS of pissed off....and looking majestically badass in that black outfit.  And I was RE-hooked.  Sorry Bash...but Francis is just so pretty and full of baditude.

Damn girl...Don't do this!!!  What's with the private chamber plotting??  Love me some Bash but you are going to cause all KINDS or problems between brothers if you keep this cray cray up!!!  Why do these women want to drive a wedge between brothers??? Have their mothers taught them nothing?? You pick one - and stick with him.  End of story!!  And, um, hello??? Do you have a brain in your head?  Just marry Francis!!  C'est la vie!!  Stop playing God!  I know Scots are awesome and all...but don't let it go to your head, bitch!

OK you know what?  Nostradamus (who is actually somewhat Stefan Salvatore-hot when cleaned up) is annoying the crap out of me.  One minute you're all sweet and ...like a little lost bird...and the next you're being a douche to that poor Rocky Denis girl in the dungeon!  Make up your damned mind!  It's no wonder she got pissed and killed your ass!  (But who gave her the knife??  Catherine, so Nasty couldn't tell on her??  Which would mean Catherine knows about her.  Which, duh, is most likely the case.  But who the eff IS she?!  Do the writers even know???  What is this, LOST???)

And has anyone ever seen Nostradamus and John Krasinski in the same room at the same time?  Just checking.

OMG Poor Francis. I can't even watch.  He is getting so screwed!!  In all areas of his life!!!  One minute he's losing the love of his life...and the next, he's losing his crown!!!!  Poor guy!! It'll serve her Scottish ass right if he takes off and goes effing every maiden girl within a 100 mile radius now that he's poor-and-cute instead of being rich-and-cute.

Where IS Francis?!?  WHERE DID HE GO???  Why isn't he in the scenes for next week??? OMG I am going to lose it.  Seriously.  I have not been this angry at a show in a LONG time.


Bottom line - I canNOT sit back and watch her marry Bash-licious with Francis nowhere in site for weeks.  THAT will just not work for me.  It *is* the CW though...so I'm sure he'll be back next week and they're just messing with us in the scenes.  Right?  RIGHT?!

And (the following involves a Vampire Diaries spoiler for those of you who haven't passed season 1 yet) here's what else is ticking me off.  I have put up with endless seasons of Elena bouncing back and forth between Stefan and Damon on The Vampire Diaries.  It's annoying as hell.  And if the CW thinks I'm going to sit back and watch that shit on a show that is SUPPOSED to have at least SOME historical accuracies....they are SADLY mistaken.


Posted by Purgatory Carol at 1:03 PM No comments:

OK so Julia just sent me this interesting DListed article about Fifty Shades of Grey...and how the author thinks the film is going to suck because there won't be enough sex and nudity.

I wanted to share my response with you guys and get your opinions.


I’m sure I'm in the minority because I really don’t want tons and tons of sex.  For me, personally, the heart of the story is Christian Grey’s effed up mind…and the people/things that have shaped his life.  I think our imaginations are usually more sexy than what’s on screen. I fear they could really screw it up if they show too much.  Just the sight of the red room - for me - will be truly exciting.  (Expecting everyone to disagree.  It’s cool.)  :)

PS - I am pleasantly surprised that everyone who responded to the email thread agreed!  I truly thought I would come off as boring as hell.  LOL   It's such an interesting topic...and not just for Fifty Shades.  I'm definitely a "less is more" person.  How about you?
Posted by Purgatory Carol at 9:13 AM 1 comment: